Skip to main content
Anti-Fraud organizes the meeting of the NEIWA Network of European authorities for the integrity and protection of whistleblowers, from which the Barcelona Declaration that calls for a correct transposition of the EU Directive emerges

Coinciding with the International Whistleblower’s Day, the Network of European Authorities for the Integrity and Protection of Whistleblowers (NEIWA), to which the Anti-Fraud Office of Catalonia belongs, publishes its Barcelona Declaration

The text was shared during the meeting of the NEIWA Network, held the previous week, where Miguel Ángel Gimeno highlighted, in his presentation, the importance of the "European NEIWA Network for all competent and protection authorities of warning people, as a unique forum to exchange experiences" 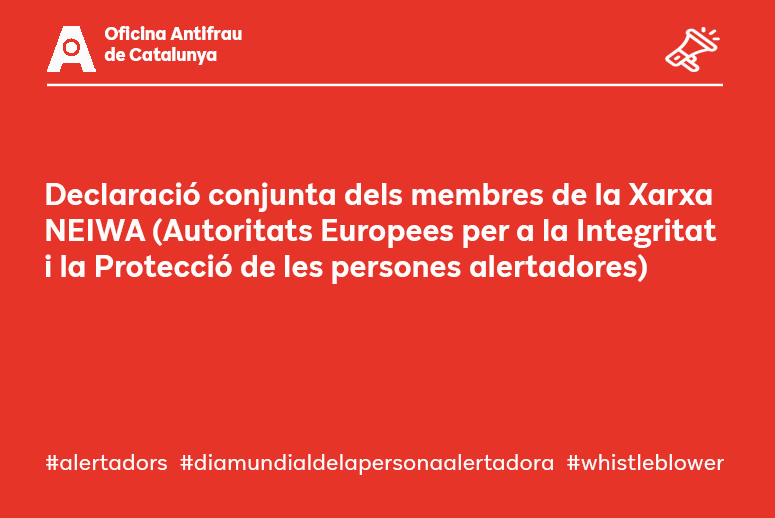 23rd June 2022. Today, coinciding with the World Whistleblower Day, the Network of European Authorities for the Integrity and Protection of Whistleblowers (NEIWA - Network of European Integrity and Whistleblowing Authorities), to which the Anti-Fraud Office Catalunya belongs to, releases its Declaration of Barcelona, agreed in the Catalan capital at the 7th meeting of the Network, which took place on June 16-17 and was organized by the Anti-Fraud Office.

In its statement the NEIWA calls for governments, administrations and other stakeholders involved in the implementation of the EU Directive to transpose it correctly into the legislation of the Member States, and makes seven recommendations.

The NEIWA Network currently represents 28 authorities from 20 EU member states and two observers. The declaration resulting from NEIWA’s meeting, urges all governments, administrations and relevant stakeholders involved in the implementation of EU Directive 2019/1937 to take note of the following recommendations:

1. Member States who have not transposed the EU Directive are encouraged to complete the transposition in accordance with its the letter and spirit without further delay and therefore avoid the further stages of the infringement procedure;

2. Recommends that the transposition covers not only breaches of EU laws foreseen in the EU Directive but covers also other breaches of national legislation, infringements and wrongdoings that could threaten the public interest, going beyond the minimum standards established by the EU Directive and thus creating a comprehensive and coherent whistleblower protection framework;

3. Recommends that Member States describe in a comprehensive way protection mechanisms and procedures in their national legislations; this can include detailed procedures for pre-emptive or corrective measures, to ensure the effective protection of reporting persons;

5. Highlights the importance that sufficient resources are allocated to competent authorities and all other authorities involved in the protection of whistleblowers for effectively implementing the EU Directive, especially the protective and support measures for reporting persons. NEIWA authorities and other authorities responsible to gather the data established in art. 27 of the EU Directive will need additional specific resources, financial support and expertise in order to gather the statistical data mentioned in art. 27 of the EU Directive. Furthermore, the EU Commission should issue a clear guidance on the data required and on an efficient and simplified mechanism to collect such data, in the absence of an obligation imposed by the Union law, the law of the State or confidentiality;

6. Recommends that awareness-raising campaigns on whistleblower protection fostering a speak-up culture in public and private sector organisations are launched in EU Member States;

7. Calls upon public authorities with a central or pivotal role in the field of whistleblowing, which have not yet done so, to consider joining and participating in NEIWA. 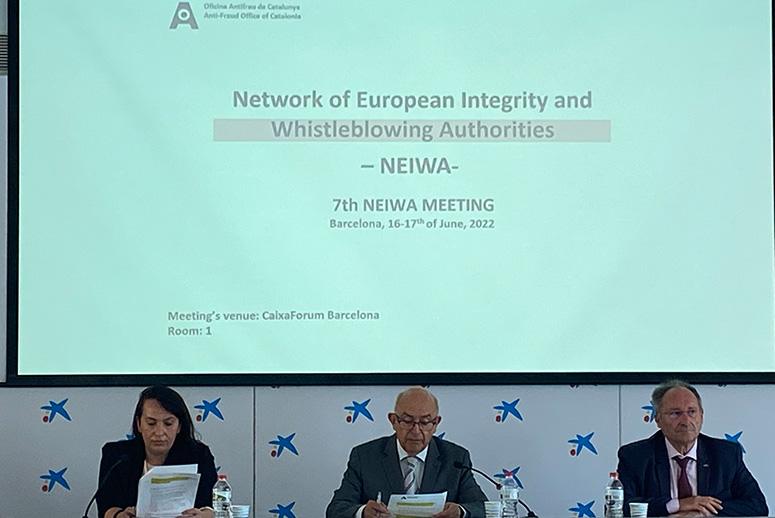 The Anti-Fraud Office of Catalonia organized last June 16th and 17th the regular meeting of the Network of European Integrity and Whistleblowing Authorities – NEIWA, which took place in Barcelona.

The Director of the Anti-Fraud Office of Catalonia, Miguel Ángel Gimeno, opened the conference with a welcome speech where he explained the areas of possible improvement and the recommendations that Anti-Fraud has presented to the Draft Law regulating the protection of persons reporting on regulatory infractions and the fight against corruption, which transposes the European Directive at the state level.

Mr. Gimeno highlighted the importance of the “NEIWA European Network for all competent authorities and for the protection of whistleblowers, as a unique forum to exchange experiences and be able to monitor, first-hand, the regulation that other countries of the world are deploying the Union in order to try to improve the regulatory frameworks”. 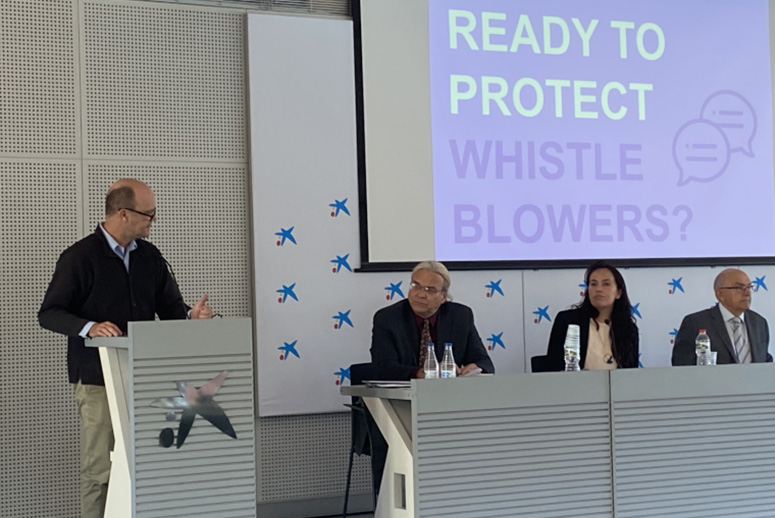 The Director of Anti-Fraud Prevention, Òscar Roca, speaks in front of the Executive Director of the European Center for Whistleblower Rights, Mark Worth, Marisa Miralles and Miguel Ángel Gimeno

The day continued with the constitution of four working groups, which dealt with various topics of interest to the network. Specifically, 'NEIWA's raison d’être, Membership and Structure', 'Financing Options', 'Better Understanding each other and Skills of Others' and 'New Overview of Transposition Progress and Specificities of Transposing National Laws' the EU Directive'.

The four working groups presented the conclusions and the debate has been opened for the joint declaration of the NEIWA of this meeting.

In the closing speech of the conference, the Director of Prevention of the Anti-Fraud Office of Catalonia, Òscar Roca, expressed the conviction that "every little effort that can be made to improve the protection framework for whistleblowers has value and contributes to strengthen us as a society”.